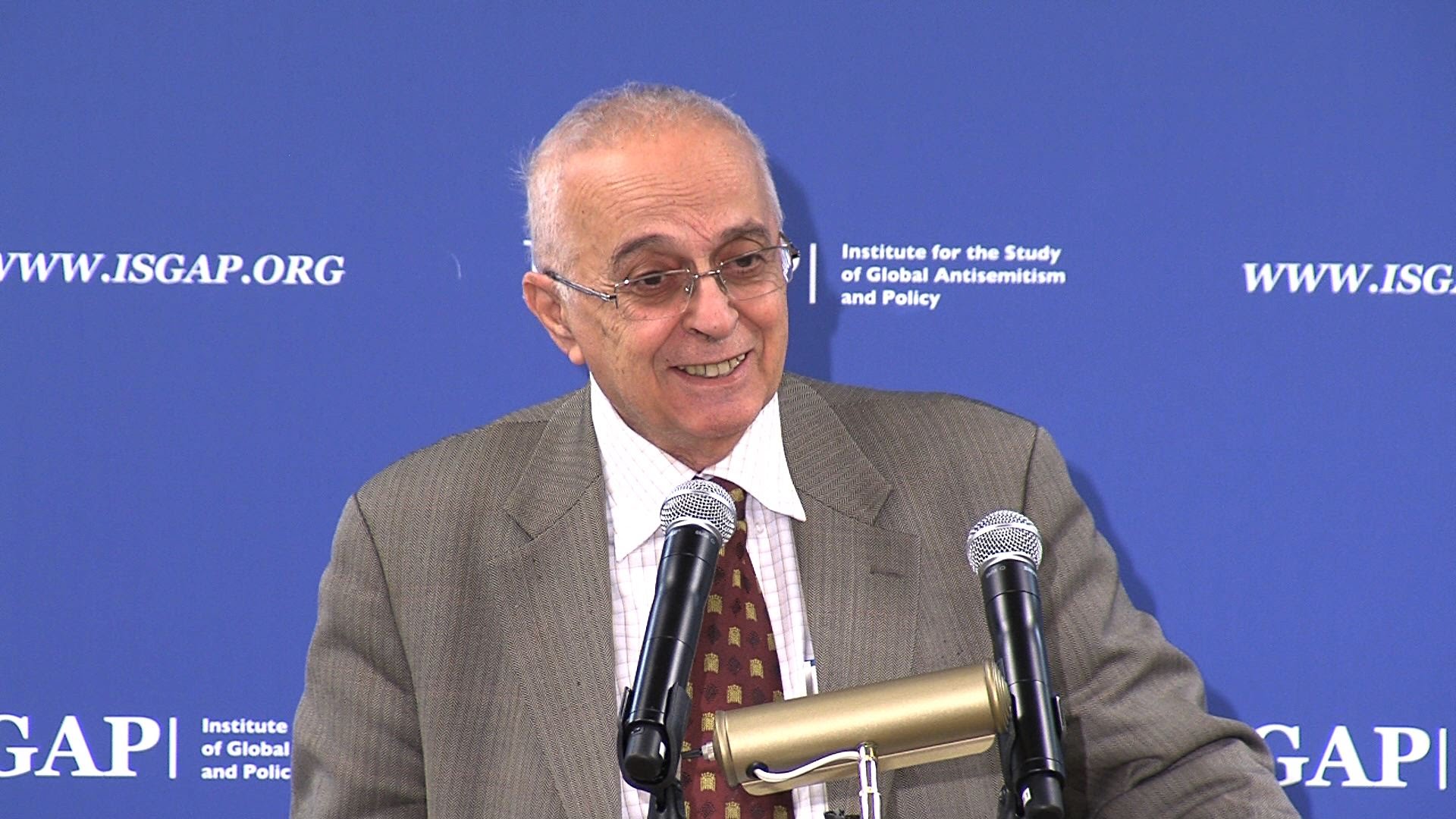 David Menashri is an Israeli professor and scholar of modern Iranian history. A leading Iranian expert, he is also the founding director of The Alliance Center for Iranian Studies at Tel Aviv University. David Menashri received his Ph.D. in Middle Eastern history from Tel Aviv University in 1982. He spent two years in Iran on the eve of the 1979 revolution conducting research in Iranian universities. His research focuses on Iranian politics, society and religion, Shia political Islam and the history of education in the Middle East. Professor Menashri was a visiting scholar at Princeton, Cornell, Chicago, Yale, Oxford, Melbourne, Monash (Australia), Munich, Mainz, and Waseda University (Tokyo). He is currently Senior Research Fellow at the Alliance Center for Modern Iranian History and the Moshe Dayan Center for Middle Eastern and African Studies.

The Periphery Doctrine, namely the development of close strategic alliances between Israel and non-Arab Muslim states in the Middle East to counteract the united opposition of Arab states, collapsed. Now we are looking to a new Middle East in which Arab states such as Egypt, Jordan and Saudi Arabia are approaching Israel to counter Iran’s hegemonic aspirations. How can you explain this and what scenarios are you expecting?

When Israel was established in 1948, it was surrounded by Arab hostile countries. Establishing relations with those countries was not possible for Israel, because Egypt, Jordan, Lebanon and Syria called for the destruction of Israeli state. For this reason, during the 50s, David Ben Gurion went over with this not-formal doctrine called the “Periphery Doctrine”. Since building relations with immediate neighbors was impossible, Israel had to establish relations with the “neighbors of the neighbors,” namely Iran, Turkey and Ethiopia, and also relations with minorities inside the Muslim world (like Kurds in Iraq or the Maronites in Lebanon).  Since the 1979 Islamic Revolution in Iran, this doctrine collapsed: Turkey, Iran and Ethiopia met new regional challenges and change their policy toward Israel, each in its own way. At the same time, Israel succeeded in building formal relations with embassies in Egypt and Jordan. Following the Arab Spring some Arab moderate countries also understood that Israel is not the enemy: Islamic radicalism created a common enemy between Israel and Moderate Arab Islamic state such as Saudi Arabia.
In the last two years, Saudi Arabia and its crown prince Mohammad Bin Salman in particular, showed a positive attitude toward Israel. What we are missing today inside Israeli-arab relations, to upgrade such relations, is a breakthrough Israeli-Palestinian relations, or at least signs of continued negotiations. No matter how the leader of Saudi Arabia like having relations with Israel: it will be extremely difficult to make them official as long as there’s no progress on the Israeli-Palestinian Issue.

As we know, Israel helped Iran during the war against Iraq, mostly because in the 80s’ Iraq seemed to be the worst Israeli enemy. Why did Iranian leaders build this strong anti- Israel propaganda? What are the reasons behind Iranian elite hate against Israel?

The war between Iran and Iraq was positive for Israel because two of its major enemies were fighting (and weakening) each other for eight years. Israel sold weapons to Iran because Iraq was considered the worst enemy at that time. Iran was hostile too, but it was too weak and more distant to be worried about. It was necessary not to let Iran collapse during the war, for Israeli best interests. Anyway, In the history of the Jewish people, Iran was a good country to live in. During the last Shah government, Israel and Iran had very close relations. Israel never viewed Iranian people in a negative way.
The Islamic regime told people that Israel is the main enemy. Why? First of all, their ideology does not accept Jews’ right to have their own state. According to their doctrine, Jews don’t have the right to have a national state, especially in the middle east and absolutely not with Jerusalem as its capital. From the same premise this is a struggle between the absolute truth (Islam) and falsehood (Judaism) and Islam should win. Also, Israel had good relations with the Shah and with US, so it was the perfect ideological enemy. The third reason is that the Islamic Revolution in Iran always aspired to be the leading force in the Muslim world, and to make sure to become such leading force you have to speak for the Palestinian people and stand with them.  Today this policy of supporting Palestinian is stronger than ever. It is very hard to change Iranian attitude toward Israel because the regime made it their main “flag”. Having withdrawn from so many ideological principle, putting down anti-Americanism and anti-Israeli policy will not leave much of the revolutionary ideology.

What is your opinion about the Middle East situation in the aftermath of the Syrian war? Do you think that Iran will succeed in creating a Shiite corridor through Iraq and Syria?

Iran claims that its activities outside the borders are defensive. They believe that being in Syria is the only way to protect Teheran. There are many similarities between Shiites and Jews: we both think we are “chosen people” and we both believe that we are persecuted. The have  the trauma of the eight years war with Iraq, and we both swore that it will never happen to us again. Iranian leadership spend a lot of money and sacrifice in, as they are claiming, influence in Syria, Iraq, Lebanon and Yemen. Thus, it outstretched Iranian abilities to control so many territories is the Middle East and they are using Pakistani, Afghani and other Shia Militias.  Nowadays Iranian leadership believe that they are the main Islamic power and that needs to be preserved from outside enemies. This adventures out of the countries is presented as the only way to protect Iran, Islamic revolution and the only true Islam. They are helping both logistically and financially Islamic militias because they think that it is Iranian duty to defend oppressed Muslim communities wherever they are.

During Ahmadinejad’s government, the nuclear issue has been at the center of Iranian policies. What has changed with Rouhani? Is the ambition to achieve a level of enrichment that allows the construction of an arsenal still present, or the possibility of dialogue with the West has turned off these ambitions?

Rouhani is not a reformist. He is not moderate, but he is pragmatic. His preference is to focus on domestic issues, and I am pretty sure that he would prefer to spend less money in Iranian involvement outside the country. In his first election campaign he said that he wanted to bring Iranian the economic justice and a better welfare. The question is how much he succeeded in it? His policy of negotiating with the 5+1 was a great victory. The deal was accepted, despite the fact that is not natural for Iranian more conservative elements to negotiate directly and have an agreement with the US. Unfortunately, from the approval of the Nuclear Deal, the situation has not improved. Nuclear deal was accepted as Rohani government’s very important success, but since that day, the west was expecting a change of behavior–in regional and domestic policy (such as on human rights).  But Iran Iranian leadership never promised a change of policy toward the west, it is maintaining this behavior, confirming that the call “death to America” will not end.

The Iranian nuclear deal has unfortunately not had the effect of making Iran a more moderate interlocutor regarding human rights and regional policy. What were the mistakes made by the West in approaching Iran and why despite the aggressiveness of the theocratic republic, it continues to support its claims?

The worst mistake of the West was not putting missile program, human rights issue and Iranian foreign policy inside the deal. Formally the Iranians claiming they stick to it but in a less-formal way they didn’t do anything to show good will and positively respond to western expectations. The new administration in US is scaring the Iranians and they don’t know what to expect.  Iran knew how to take advantage from changing realities: for example, they succeeded in building strong relations with Russian Anyway, Russia is not happy with Iranian nuclear capabilities; they will not be pleased with an Iranian nuclear state next to the border. For now, however, they share common interest in keeping Assad in power. Israel has good relations with Russia, but Russian look at their own interest.

What is exactly the purpose of the Iranian Revolutionary Corp Guards nowadays? What does it mean to protect the revolution today and against whom?

The Islamic Revolutionary Guard Corps goal is to protect the Islamic regime. What is the meaning of protecting? the revolutionary guards are the arm of the revolution. Their purpose is to maintain Iranian influence outside the border. Initially, their main goal was domestic and also fighting with Iraq, but now they are mainly operating in Syria, Iraq, Lebanon, Yemen and other countries. We need to understand that Iran nowadays is considered the leading force and the main center of Islam.  According to current leadership, Teheran is the capital city of the Islam and all Muslims are obliged to be faithful to ayatollah Khamenei.
Iran has been an empire (Cyrus the great) and in many statements of Iranian leaders today we can see that they still perceive themselves as the old Iranian empire. In the 20th century, western civilization had been based on American capitalism and communism pillars. Iranian clergy firmly believe that Islam is the ideology of tomorrow, they really trust in Islamic perspective especially with connection to Iranian Hegemonic aspirations. The reason why IRCG is still powerful is that the country needs to create an outside enemy (like Israel or the US) to hide internal corruption and responsibilities for the internal problems. Israel did not choose to be Iran’s enemy. Iranians policymakers, on the other hand, chose Israel as the main enemy because it is easy to divert public opinion against our country to cover their own failures and internal problems.