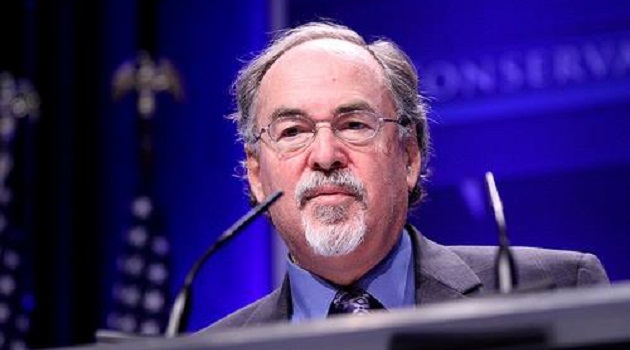 David Horowitz is not afraid to speak to your face. From his mouth, when he talks about politics, you will never hear something mild because he knows that in our age the tomb of truth is the Newspeak of politically correctness.
In the Sixties he was a young Marxist intellectual in London working for Bertrand Russell and becoming a friend of Isaac Deutscher, Trotzky’s biographer and high priest of the British New Left. By the closing of the decade he was in California where he cooperated with the Black Panthers. That was before his deep shift of ideas.
“Just as Stalin had used the idealism and loyalty of my parents’ generation to commit his crimes in the ’30s, so the Panthers had used my generation’s idealism in the ’60s.”, he would later say.
Today David Horowitz is the president of the conservative think tank which carries his name, “The David Horowitz Freedom Center” and the editor of Frontpage Magazine an online war machine against what he considers to be America’s submission to progressive ideology.
Author of many books of which a great part are devoted to shed light on the gears and mystifications of the Left in its different forms, he represents one of the most thorny voices of the American cultural and political landscape.

Mr. Horowitz I would like to start with a question about the Freedom Center of which you are president. What are the aims of the center?
The Center was created to defend free societies that are under attack from totalitarian forces within and without. This mission led to a second: to wake up conservatives and other patriots who don’t understand that the “progressive” “social democratic” left is a totalitarian force itself, or a totalitarian enabler, and therefore a party to the war against free market democracies.

Like George Orwell and Arthur Koestler you have come out from the left and become one of its strongest opponents. If you were to identify the most persistent and fallacious set of ideas of the leftist mindset, what would they be?
Virtually all the ideas of the left are false because they are based on the premise that if leftists are given enough power they can create a mythical paradise alternately called “communism” “socialism” or “social justice.” It is both the beauty and impossibility of their utopian dreams that make them so dangerous, and such ready allies of democracy’s enemies – even the Islamic barbarians at the gates.

For years you have been denouncing the way in which many American campuses and universities have become places for liberal if not blatantly neo-marxist and ant-western indoctrination. What made this outcome possible in the States?
The blindness of conservatives to the threat. “Liberal” is a deceptive term for the left, which is bigoted and intolerant, and “neo-Marxist” is too mild. They are more accurately seen as “neo-Communists.” Even Marx didn’t call for the purging of conservatives and other dissenters from university faculties and reading lists.

Today anti-Zionism is the expression of a mindset which goes along with anti-Americanism. For those who think this way, the West is seen as the source of all evil. Is it as if we were still living in the Cold War and the Soviet Union had never collapsed? Do you agree?
Anti-Zionism is another name for Jew hatred. There is no other ethnicity or religion in the world that would be the target of such hatred as the Jewish state, and no other antagonism – except that against America – that would forge an alliance between the progressive left and the Nazis of Islam, who unlike Hitler who concealed his plans for the Final Solution, shout from the rooftops that their goal is to finish the job that Hitler started.

How do you explain that people like Noam Chomsky and Norman Finkelstein, both Jews, have got to the point of praising a terrorist group like Hezbollah which interprets Islam in a radical way and is openly anti-Semitic?
Chomsky and Finkelstein are delusional Jews whose religion is the utopian fantasy of the left. This makes anti-Americanism and the destruction of Israel their priorities, and leads them to make alliances with Medieval Jew haters whose goal is a genocide not only of the Jews but of Christians, Hindus and all non-Muslims.

It’s not a secret that between President Obama and Israel Prime Minister Benjamin Netanyahu there is a very deep contrast regarding what is better for Israel and the Middle East. Many think that President Obama has been by far the less friendly American President towards Israel. What do you think?
Obama has thrown his support to the Muslim Brotherhood, which is the fountainhead of Islamic Nazism and terror, and is the source of the Palestinians’ genocidal campaign to push the Jews into the sea. Although conservatives are still intimidated from saying the truth about Obama because he is black, Obama is an American traitor who has delivered nuclear weapons and ballistic missiles to the Iranians who openly proclaim that their goal is “Death to America,” and “Death to Israel.”

With his 2008 speech in Cairo President Obama defined Islam as “religion of peace”, a definition that was also used before him by President Bush Jr. This administration has constantly refused to connect jihadism to its Muslim, Koranic roots. How important it is that this attitude changes?
It is crucial to winning the global war that the Islamists have declared against us. The Prophet Mohammed called for the extermination of the Jews and a holy war to be waged against infidels – Christians, Hindus, atheists and anyone who will not submit to the Muslim faith. Islam is the only religion, which has been spread by the sword at the specific behest of its prophet.

Dr. Matthias Kuntzel, one of the foremost European scholars on Islamism and jihadism, in a recent interview given to us, said about the Iranian nuclear deal that it is like having promised to a pyromaniac as a reward for ten years of restraint ‘a pallet full of gasoline cans’. Do you agree with him?
Yes but his words are much too mild. Obama has given nuclear weapons to the Hitlers of the Middle East, and thereby signed Israel’s death warrant. Whether Israel can defend itself by obliterating the Iranian regime remains to be scene. But the bloodshed that Obama has authorized will be horrible.

Finally I would like to ask you a question about Donald Trump. Many in Europe see him as a sign of a Thirld-Worldish involution, and unfit to be the Republican nominee. What is your opinion?
I remember when Kennedy was assassinated and Lyndon Johnson became president. I was in England at the time. Europeans felt the same way about Johnson. Europeans have a tendency to look down their noses at Americans because we have bailed them out in two world wars. We had to do so because they long ago lost the will to defend the magnificent cultures their ancestors created. Saviors are crucified – that is one moral of Christianity that is rarely remembered.