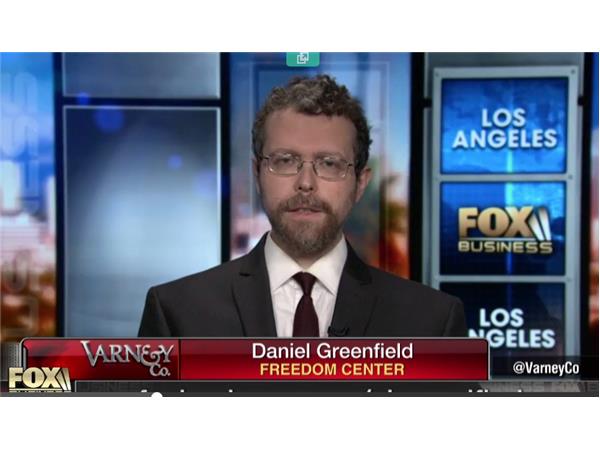 Daniel Greenfield is a Shillman Journalism Fellow at the David Horowitz Freedom Center. A journalist and writer, he covers the radical left and Islamic terrorism. On Frontpage.mag he maintains his fearsome column “The Point,” through which he delivers hammer blows to the main myths of progressivism.

He is the author of a series of essays and pamphlets dedicated to the demolition of the ideological foundations of Palestinianism: 10 Reasons to Abolish the UN, Students for Justice in Palestine: A Hate Group, Muslim Hate Groups on Campus, Barack Obama’s Unholy Alliance.

You and the other authors of the “David Horowitz Freedom Center” fight against progressivism. Why is the Left dangerous to Western societies?

The Left is built on progressive deconstruction and radical revolution. On the moderate side it chips away, destroys and then transforms every idea, principle, and value. On the extreme side, it attacks them all in a revolutionary moment. Western societies, like all societies, are built on a heritage of tradition from which they develop and grow. The Left seeks to destroy all these elements of the past in order to start from a new blank page in which only its ideological abstractions can guide man in his way of life.

Donald Trump’s defeat was a defeat for conservatives everywhere. What is your assessment of the Trump administration? Do you think he will run again in the next presidential election?

The Trump administration, like all others, had its victories and defeats, but it gave hope to many people who had lost hope because they were too far outside the political system. The task for those who supported him is to find the means to rebuild the hope that ordinary people can bring change and restore control over their lives.

In your opinion how will the Biden administration relate to Israel?

The Biden administration, like its predecessor, Obama, sees Israel, America, and free countries that resist Islamic terrorism and tyranny as enemies who must be broken. The relationship can only be a hostile one because Israel, to the Left, is an illegitimate country that should not exist because it stands in the way of the ambitions of its Islamist allies, whether of Iran or the Muslim Brotherhood. The Left defines the world through the lens of colonialism and capitalism. Israel, like America, is guilty of both. Only by destroying free countries can their populaces atone for their sins.

Today anti-Zionism is the expression of a mindset which goes along with anti-Americanism. Why does the Left hate Israel and America so much?

America and Israel were both countries founded by pioneers who sought to live their values by uplifting a land. This is now denounced as colonialism. The Left aspires to revert history back to some imagined past before the dawn of civilization when man existed in an ideal state as a noble savage and knew nothing of religion, culture, or industry. It embraces whatever destructive vehicles exist for this project.

For years you have been denouncing the way in which many American campuses and universities have become places for liberal, anti-Zionism and ant-western indoctrination. What caused this situation?

Campuses and universities are places where men grapple with the world of ideas. And ideas can be compelling vehicles for uplifting us, but they can also take us down blind alleys. The heroism of ideas is liberating, but the tyranny of ideas allows men in ivory towers to playact as philosopher kings who impose their abstractions on society, and when society does not embrace them, turn to manipulation and even violence. The battle for a society can often be won or lost in this world of ideas. And unfortunately universities are the places where we lost the war of ideas, not through debate, but through a false vocabulary, distorted premises, and political intimidation.

David Horowitz spoke of the “Unholy Alliance” to refer to the alliance between the Left and Islamic radicals. What makes progressivism and radical Islam similar?

David Horowitz very wisely pointed out a similarity between leftists and Islamists. Both seek to destroy an imperfect world that exists for the perfect one of their visions. They are willing to commit every immoral act in pursuit of their perfectly moral world. This fanaticism is a mirror image and destroys everything it touches.