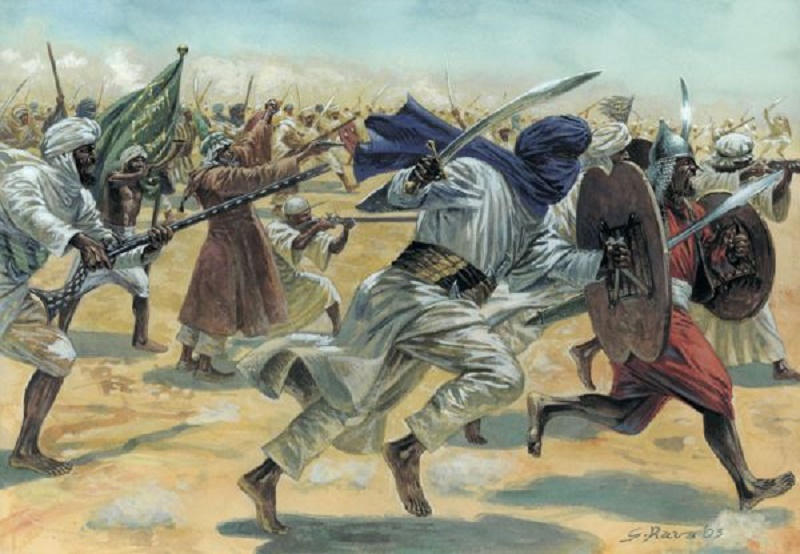 Italian publishers are disinclined to translate and publish books critical of Islam. You recently published Defenders of the West. Can you expose to our readers the content of the text?

Yes, it’s a follow-up to my previous book, Sword and Scimitar: Fourteen Centuries of War between Islam and the West.  Whereas that book focused on eight decisive battles between Islam and Europe that shaped the course of history, Defenders of the West focuses on eight decisive men. It looks at that same long war between Islam and Europe, but through the lens and lives of these eight warriors, whose lives and exploits are more dramatic than most fiction movies can capture. Ironically, whereas all eight of these men were once heralded as great exemplars and heroes, most of them are today either completely unknown, or else vilified, and their defensive wars against Islam presented as intolerant or unprovoked attacks by “Islamophobes” and xenophobes who were incapable of “celebrating diversity.”  I should add that I managed to delve into several arcane and little known sources, in different languages, to offer the most accurate and riveting account of their struggles against the jihad.

The Russian invasion of Ukraine has made Europe more dependent on Turkey, Azerbaijan, Algeria and the Muslim countries of the Caspian Sea. In the future, how will these Muslim nations exploit our dependence on their energy resources?

Well, if history is any indicator, these Muslim nations will exploit our dependence on their energy resources in a manner that bolsters Islam, including on the world community. For example, Saudi petrodollars are well-known to fund and disseminate the most radical form of Islamic teaching in mosques and madrasas all throughout the world, including if not especially in the West—so-called “Wahhabism” (which is really another way of saying literal and purist Islam).  Furthermore, trying to strengthen Islam and weaken Infidels is a Muslim imperative, one which can be achieved in many ways, jihad only being the most famous.  In this scenario, Muslims will use the infidels’ own money and dependence on Muslim resources to radicalize fellow Muslims against the West.

Muslims have conquered and subjugated vast territories all over the world, from Europe to Asia to Africa. How is it possible that a warrior and slave-holding civilization is, now, considered a “victim” of supposed Western oppression?

Yes, it’s quite the amazing turn of events, no? The reason such a topsy-turvy history has managed to prevail is twofold: First, the bulk of the real historical interaction between Islam in the West—centuries’ worth of war, conquest, bloodshed, and mass slavery—has been suppressed; here I am discussing the ongoing, violent, jihadist onslaught perpetrated by Muslim caliphates, sultanate, emirates, from a variety of nations, including Arabs, Berbers, Turks, and Tatars. As discussed in both books, Defenders of the West and Sword and Scimitar, for well over a thousand years, these diverse peoples, operating under a distinctly Islamic logic—the sort championed by ISIS, the sort we were told has “nothing to do with Islam”—waged a relentless jihad on every corner of Europe, going as far as Iceland in their slave raids. Moreover, in the early centuries of Islam, three-quarters of the original Christian world—including all of North Africa, from Morocco to Egypt, the Middle East, and Asia Minor (now known as Turkey)—were violently annexed from the Christian world, even though these regions represented the older and more developed regions of Christianity. Unfortunately, few people in the West know this; they seem to think that the Middle East and North Africa was always Islamic. But not only has this history been completely suppressed; in its place, whatever anecdotes can be found to demonize Europeans and present Muslims as victims have been stripped out of context, exaggerated, and widely disseminated.

Is this what occurred with the Crusades?

The Crusades are a perfect example. If you speak to any Western person and ask them when did conflicts begin between Muslims and Europeans, they will invariably say the Crusades.  In so doing, they expose their ignorance that, in fact, the Crusades were really a drop in the bucket of the totality of warfare between Islam and the West over the course of more than one millennium; and during all of those wars—including the United States of America’s first war as a nation, with “Barbary”—it was the Muslims who were the aggressors. Why else was Islam in Spain, or the Balkans, or Russia, for centuries? Finally, when the “mainstream” talks about the historical interaction between the West and Islam, they invariably begin with the colonial era, that is to say, they begin during that brief time span when the West finally became militarily superior to Islam, and therefore can be positioned as the aggressor.  Ironically, and in reality, even the early European colonizers were operating within the context of the nonstop, long war between Islam and themselves; in other words, they were trying to reform or at the very least defang the Muslim world.

The recent stabbing of Salman Rushdie shows that Islam has a “long memory”regarding the “offenses” of which it considers itself a victim; in contrast, Westerners quickly forget terrorist attacks and Islamic violence. To what do we owe this difference in memory?

Good question. I think much of it revolves around how Muslims and Westerners have been conditioned. Muslims, I would say, have a natural or normal kind of memory, one that places and interprets events in the context of their history.  Western people, on the other hand, are habituated by the so-called “news,” to think and care only about what is “new”—even though, of course, nothing is really ever new—before passing onto the next thing that the “news” is abuzz with and forgetting the former.