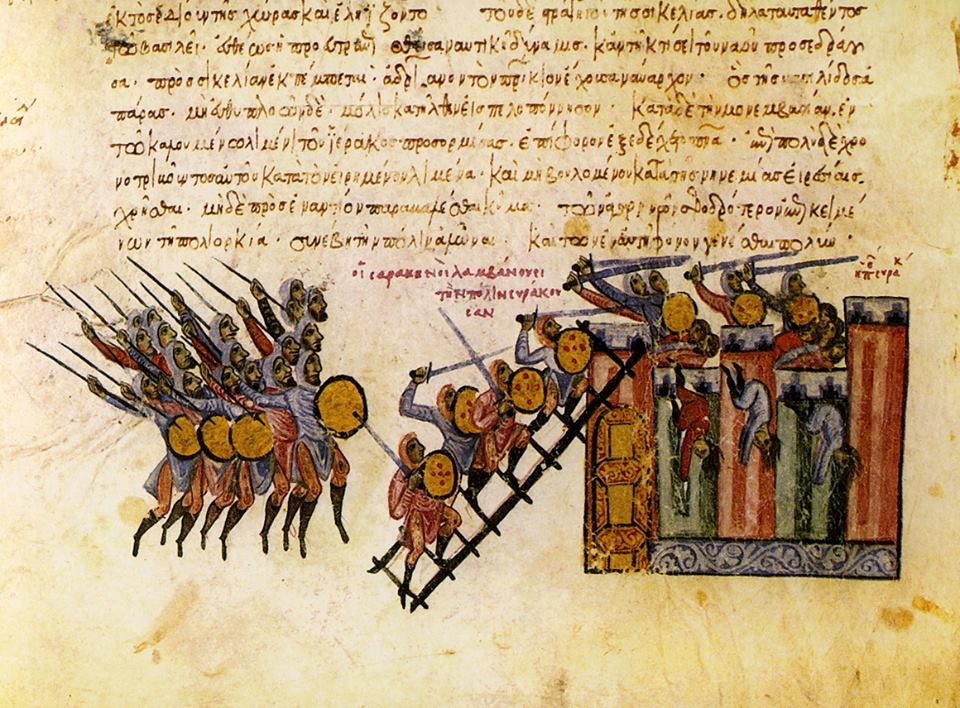 Although the conflict between Islam and the West is a continuation of history, the strategy of those who seek to whitewash and thus empower Islam is to fixate on peaceful aberrations while suppressing the continuum of hostility.

Thus, in “Italy must remember its pluralist past,” Akbar Ahmed, Chair of Islamic Studies at American University, Washington, DC, highlights uncharacteristic episodes from Italy’s past with Muslims in an attempt to convince Italians to be even more welcoming of Muslim migrants. Before looking at his claims, some actual historical context concerning Italy and Islam—otherwise devoid in Akbar’s article about the “past”—is needed.

Once the jihad was unleashed from Arabia, not only was Italy bombarded and under threat for centuries, but as the seat of Rome—the capital of Western Christendom, i.e., Infidel-dom—several ambitious caliphs and sultans especially targeted it, often while making the perennial Islamic boast that they would be first to turn St. Peter’s altar into a feeding trough for their horses.

As early as the seventh century, “the nation of the Saracens that had already spread through Alexandria and Egypt,” wrote Paul the Deacon (b. 720), “came suddenly with many ships, invaded Sicily, entered Syracuse and made a great slaughter of the people—a few only escaping with difficulty who had fled to the strongest fortresses and the mountain ranges—and they carried off also great booty…and thus they returned to Alexandria.”

By 846 Muslim fleets managed to land on the coast of Ostia, near Rome. Unable to breach the walls of the Eternal City, they sacked and despoiled the surrounding countryside, including—to the shock of Western Christendom—the venerated basilicas of St. Peter and St. Paul. The invaders vandalized the two holy shrines, desecrated the tombs of Christendom’s two most revered apostles, and stripped them of their treasures.

Such sacrilege prompted Pope Leo IV to erect strong walls and fortifications along the right bank of the Tiber to protect the basilicas and other churches from further Muslim raids.  Not ones to be deterred, “in 849 the Muslims attempted a new landing at Ostia; then, every year from around 857 on, they threatened the Roman seaboard,” explains French medieval historian C. E. Dufourcq.

Indeed, the following entry from Ibn al-Athir’s history dealing with southern Italy and Sicily is indicative of the quantity and quality of these Islamic invasions:

Another raid [in 835] directed at Etna and the neighboring strongholds resulted in the burning of harvests, the slaughter of many men and pillage. Another raid was again organized in the same direction by Abu al-Aghlab in 221 [according to the Muslim calendar, which in this case corresponded to Christmas Day, 835]; the booty brought back was so extensive that slaves were sold for almost nothing.…In the same year, a fleet was sent against the [neighboring Christian] islands; after having taken rich booty and conquered several towns and fortresses there, they returned safe and sound. In 234 [August 5, 848], the inhabitants of Ragusa made peace with the Muslims in exchange for surrendering the town and what it contained. The conquerors destroyed it after having taken away everything that could be transported. In 235 [July 25, 849], a troop of Muslims marched against Castrogiovanni and returned safe and sound, after having subjected that town to pillage, murder and fire [Ye’or 2010, 289–290].

Although centuries of crusades largely safeguarded Italy and Sicily from further Islamic attacks, by 1480, Ottoman Sultan Muhammad II invaded Italy and captured Otranto.  More than half of its twenty-two thousand inhabitants were massacred, five thousand led away in chains. On a hilltop (subsequently named “Martyr’s Hill”) another eight hundred Christians were ritually beheaded for refusing to convert to Islam (see above image ) and their archbishop sawed in half.

Here is how French priest Jerome Maurand described the fate of the inhabitants of the tiny island of Lipari off Sicily after it was invaded by the Ottomans in 1544: “To see so many poor Christians, and especially so many little boys and girls [enslaved] caused a very great pity.…The tears, wailings and cries of these poor Lipariotes, the father regarding his son and the mother her daughter…weeping while leaving their own city in order to be brought into slavery by those dogs who seemed like rapacious wolves amidst timid lambs.”

Failing to comprehend why the Muslim conquerors so wantonly tortured the now enslaved population—including by slowly gutting the old and infirmed with knives “out of spite”—he “asked these Turks why they treated the poor Christians with such cruelty, [and] they replied that such behavior had very great virtue; that was the only answer we ever got.”

Finally, a great many of those millions of Europeans enslaved and sold in Muslim Barbary between the fifteenth and nineteenth centuries were originally seized from the Italian coastline and Sicily.

Needless to say, these centuries and events—documented in my book, Sword and Scimitar: Fourteen Centuries of War between Islam and the West—never make it in Akbar’s article, “Italy must remember its pluralist past.”

Instead—and because his agenda is to prompt Italians to be even more accommodating of Muslim migrants—he ignores the constants while fixating on those aberrations that might validate his thesis:

Italy produced Christian leaders such as Roger II, the King of Sicily, and Frederick II, the Holy Roman Emperor, King of Sicily, and King of Italy, who spoke Arabic, had Muslim bodyguards, and featured Arabic inscriptions on their royal mantle. Muslims and Jews were permitted to live by their own laws, and the jewel of Sicilian architecture, Roger’s twelfth-century Palatine Chapel, incorporated Christian, Muslim, and Jewish influences.

Such is Akbar’s evidence concerning Italy’s “pluralist past.”  While his anecdotes seem a far cry from the aforementioned centuries of unwavering hostility, one is still at loss concerning Akbar’s point.  After all, few if any Italians today have a problem with knowing Arabic, employing non-Christians, allowing others to live according to their customs, or erecting exotic architecture.

Rather, they have a problem with facilitating the ancient jihad against their homeland by bringing in more and more Muslim migrants who act in accordance with the history that Akbar suggests never happened.