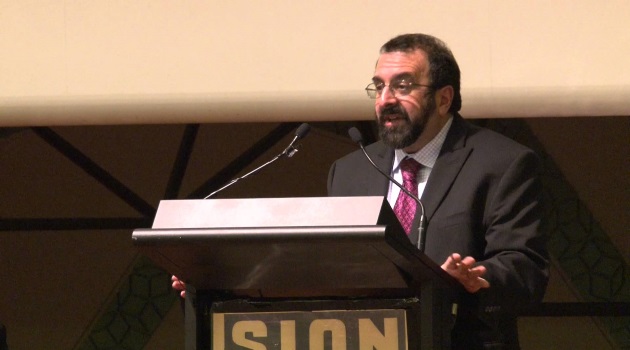 A clear voice like that of Robert Spencer, the director and founder of Jihad Watch, author of countless articles and numerous bestselling books on Islam and jihadism, among which the most recent are The Complete Infidel Guide to ISIS and The Complete Infidel Guide to Iran, is an antidote to the time of deception and fuzziness we are living in. After the interview he gave us in March he has kindly accepted to answer our new questions. As usual he pulls no punches.

Mr. Spencer, there is a mainstream notion nowadays that ISIS is not truly Islamic but an ideology which has hijacked Islam to put forward its own agenda. You have explained again and again that ISIS is Islam at its most hardcore. This is what Abu Bakr al-Baghdadi and his followers think it is. What are, according to you, the good reasons to think that ISIS belongs to Islam?

In 1954, in what is considered to be his masterpiece, Sad Tropes the great French anthropologist Claude Lévi-Strauss wrote quite disparagingly about Islam. Among other considerations he wrote, “This religion is based less on evidence of a revelation than on the inability to forge links outside itself…Muslims do not always seek brutality to bring the other to share their truth, yet they are unable to bear the existence of others as others”. Would you agree on this statement and what would you add to it?

I agree with it insofar as it is noted that Muslims can bear the existence of others as others as long as the others are subjugated and are submitting to Islamic hegemony. But ultimately, Lévi-Strauss is quite correct, in that the Muslims’ vision of the last days includes the return to earth of Jesus the Muslim prophet, who will break the cross, kill the pigs and abolish the dhimma – that is, he will abolish the state of subjugation in which the Christians and Jews will have lived up to that point, and destroy the others as others entirely.

Not only in the United States but all over Europe the left wants to present Islam as a religion of peace. This mantra is repeated all the time in the face of Islamic terrorism, for which the most diverse explanations are given. The common denominator of all these explanations offered by the left is that the root of jihadism is non religious. According to you why is the left so protective of Islam?

Either they know that what they’re saying is false, and are cynically propagating their falsehoods in service of a globalist agenda, or they actually believe the claims that Muslims are a despised minority, the victim of “racism” and “Islamophobia,” and so must be treated with special solicitude, including pretending that the root causes of jihad terror are other than what they are.

It seems that what Samuel P. Huntington wrote about Islam in The Clash of Civilizations is the reality we are presently living. I would like to read you this brief passage from the book. “Who is to rule? Who is to be ruled? The central issue of politics defined by Lenin is the contrast between Islam and the West…So long as Islam remains Islam (which it will) and the West remains the West (which is more dubious) this fundamental conflict between two great civilizations and ways of life will continue to define their relation in the future even as it has defined them for the past fourteen centuries”.  How would you like to comment about this?

There is no doubt whatsoever that Huntington was correct. Every day’s headlines prove him correct anew.

Contrary to Judaism and Christianity, among which continuous exegesis and historical circumstances have brought to deep changes in the understanding of the Scriptures, this has not happened in mainstream Islam. What are, according to you, the main reasons for this?

The Qur’an says, “this day I have perfected your religion for you” (5:3). How can what is perfect be reformed or ever be hospitable to new understandings? Muhammad also says in a hadith, “My community will not agree on an error.” Accordingly, if there is consensus (ijma) on an issue, it cannot be reopened.

The exercise of critical thinking and independent judgment or ijtihad was an important method to address questions in the early centuries of Islam. However after approximately 400 years the Sunni world closed the so called “gates” of the ijtihad and from that time they were never opened again. This has not happened among the Shiites who still practice ijtihad. In this sense is there a better chance of an eventual reform of Islam coming from the Shiites?

One never knows what may happen, but ijtihad is independent reasoning on the sources of Islamic law, the Qur’an and Sunnah. Since those sources contain numerous exhortations to violence, it is unlikely that ijtihad will ever produce a religion of peace.

Following my previous question do you think there is a chance that Islam can be reformed from the inside or is this just a wishful thinking?

No one knows the future, but it is wildly unlikely.

In an astonishing remark made recently during an interview, Pope Francis conceded that conquest is “inherent to the soul of Islam” but immediately after he added that the same idea of conquest can be found at the end of Matthew’s Gospel, when Jesus sends his disciples to all the nations. What would you like to say about his statement?

It was one of the most appalling statements ever to come from a man who has a history of appalling statement. The call to “make disciples of all nations” is one to preach the Gospel, not to take up arms to conquer and subjugate. That the Pope would equate the two was a manifestation of a moral myopia of monstrous proportions.

Now that the American elections are approaching I would like to end our interview with a question about the USA. I would like to do it, again citing Samul P. Huntington. “Whether the West comes together politically and economically, depends overwhelmingly on whether the United States reaffirms its identity as a Western nation and defines its global role as the leader of Western civilization”. Do you endorse this statement?

Yes, absolutely. And it could still happen. But time is growing very short.