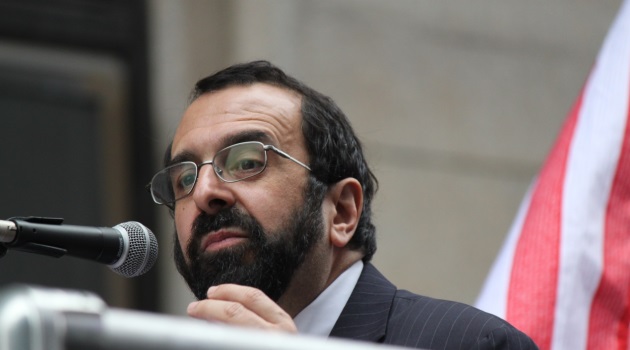 Robert Spencer the pugnacious director-founder of Jihad Watch and co-founder with Pamela Geller of SIOA (Stop Islamization of America), is an inopportune character. He is among that group of Western authors and scholars who reject the comfortable narrative about Islam as a religion of peace and show instead a far less pleasing side of it.

Author of many books on the topic, few like him are able to master with such a brilliant expertise (his knowledge of Islamic religious texts and Islamic history is impressive) a debate on the subject, as those orthodox Muslims who have debated him know very well.

It goes without saying that he is considered to be “islamophobic”, like all those who, by going against the current, criticize Islam. Not for nothing, he has coauthored with David Horowitz, a pamphlet with an emblematic title, “Islamophobia: Thought Crime of the Totalitarian Future”.

Today around Islam there is a sort of quarantine. It is the only world religion which is impossible to criticize without being immediately accused of being phobic. According to you why have we got to this point?
Islamic advocacy groups, generally tied to Hamas and the Muslim Brotherhood, along with their Leftist allies have made a concerted effort to stigmatize all criticism of Islam and honest discussion of the roots of jihad terror activity in Islamic texts and teachings. They have effectively intimidated people into assuming that it is somehow morally wrong to criticize or resist jihad terror and Sharia oppression.

We cannot endorse the statement that all Muslims are in favor of jihad. However Islam is the only religion that is at pain in criticizing itself and condemning the violence that stems from it. Why?
Criticism of Islam is forbidden in Islamic law. Since jihadis use the texts and teachings of Islam to justify violence and oppression, and to make recruits among peaceful Muslims, many Muslims assume that to criticize even jihad violence is to criticize Islam itself and falls under the prohibition of such criticism.

In one of his books the great twentieth century scholar Ignác Goldziher wrote, “Muhammad is the prophet of struggle and war…What he did initially in the Arab context has the value of a testament for his followers, struggle against the infidels, extension not quite of their faith but of their power sphere, which is the power sphere of Allah. The fighters of Islam must first of all subdue more than convert the infidels”. How much of this is still true today?
That is 100% true today. Muhammad’s example remains paramount for Muslims, since he is held up as the supreme model for emulation in the Qur’an (33:21). The Qur’an mandates, as Goldziher put it, the subjugation of the infidels and the extension of Islam’s power sphere over them, not their conversion to Islam.

From various decades we are assisting to a peculiar phenomenon, the subscription of many intellectuals and academics both in Europe and in the United States to a specific narrative according to which Islamic terrorism is not truly Islamic but is the product of external causes and basically of the West. According to you what are the reasons of this attitude?
Such intellectuals are following in the footsteps of the forbears they reject and abhor, and have adopted an unconscious “white man’s burden” paternalism in assuming that Muslims cannot act of their own accord and from their own beliefs, but can only react to the depredations of the West. Only Western non-Muslims, in their unconscious assumption, can act responsibly and rationally.

Last year at Al-Azhar University of Cairo, Egyptian President Al Sisi, in front of an audience full of religious authorities said that Islamic violence has its roots in religion. What do you think about his words?
His words were true and needed. What is striking, however, is that no Muslim clerics in Egypt or anywhere else have taken up his call for reform and begun working toward that reform.

In his book “Jihad and Jew hatred”, Matthias Kuntzel wrote, “The division of the world into Islamic and non-Islamic spheres partially explains the hatred that orthodox Muslim feel for Israel…Many Muslims view the situation in Palestine as a modern version of the early Islamic antagonism between Muhammad and the Jews, with the result that they consider seventh-century expulsion and killing of the Jews as the model for current policy towards Israel”. Do you think he is correct?
Yes, absolutely. Muhammad’s antagonism toward the Jews is, for Muslims, sacred history, and a paradigm for their own interactions with Jews and Israel.

Only by interpreting the Koran literally its possible to arrive to its truth. This is what the literalists say, the purists, Salafi and Wahhabi. This is what ISIS says and puts into action. The problem of Islam, at its core, is a problem of sticking to the letter of its religious text?
Yes. Any reform in Islam toward pluralism and peaceful coexistence as equals with Infidels would have to proceed on the basis of an explicit rejection of Qur’anic literalism.

My last question is about the United States, your country. In these last eight years we have witnessed how President Obama has constantly mitigated up to the point of refusing to nominate it, any connection between Islamic terrorism and its religious origin. We know that the United States have an important economic relation with Saudi Arabia, a country of strict Wahhabi observance. According to you what must change in the relation between United States and the Arab-Muslim world?
Alliances with states that promote the ideology that fuels jihad terror (such as, but not limited to, Saudi Arabia) must be broken, and new alliances formed with states that are, like the US, facing the jihad threat.